What Is A Kickstarter?

As we approach the launch of our Kickstarter campaign (April 9, 2019), I wanted to take a moment to explain Kickstarter. Even though Kickstarter is an enormous global community built around creativity and creative projects and over 10 million people, from every continent on earth, have backed a Kickstarter project, some people still may not know how it works.

Kickstarter is a crowdfunding platform. This means it’s a place where creative people seek funding from the online crowd for their ideas and products to avoid seeking venture capital, investors or loans. Creatives present their concepts online and offer rewards for pledges of support. If the crowd is receptive they can each give a little or a lot. Kickstarter has an all-or-nothing funding model so if the creative gets 99% or less of their goal in pledges, the project fails and the supporters are not charged (and no rewards). But if the creator gets 100% or more support for their project, the supporters’ pledges are charged to their credit cards at the end of the fund drive – usually around 30 days – and the creative completes their project and sends out rewards to their supporters.

WHAT KICKSTARTER IS NOT

Kickstarter is not a personal/charity fundraising platform. I know you’ve probably at one point received a notification from a friend or loved one asking you to give money for their honeymoon, mission trip, or surgery for their cat. These are all great things and the Internet is a fantastic way for people to help others. But Kickstarter is an online fundraising platform for creative projects. It’s a community where professionals share their projects and financial backers join in making that project come to life (and receive a rewards in return). This way, the creator retains creative control to make the project the best it could possibly be and backers can enjoy it as well.

So, what is a reward, backer, and all that?

KICKSTARTER is a place where creative people seek a small amount of funding from a large amount of people to help turn their ideas into reality.

A CREATOR is the person who comes up with the idea. They present a plan about what they wish to launch and how they intend to do it, this is called the PROJECT.

Every project must have a clearly defined outcome and FUNDING GOAL, which is the amount of money needed in order to complete the project.

BACKERS are individuals who are interested in the project and they pledge monies to help bring it to life. In return the creator offers REWARDS as a way to thank individuals for their support.

Kickstarter has an all-or-nothing funding model so if the project doesn’t reach its goal, the backers are not charged, no rewards are given, and the project may not get made.

SHEETZ VS WAWA: THE MOVIE

We are still finalizing our rewards but they are likely to include a digital copy of the film, DVD or Blu-Ray of the film, special behind the scenes access, VIP tickets to the premiere, a chance to view the film early, as well as some cool swag like T-shirts designed and printed by Commonwealth Press…and more.

So, fans of Sheetz Vs Wawa: The Movie will have the opportunity to back the project starting April 9, 2019. Meaning, backers will pledge money to the production of the film and if we reach our goal within the 30 days of the project, the funds will be released to make the movie.

To produce a full length movie that may be published on Netflix or Amazon takes a lot of resources. The money raised will be used to procure production equipment, pay professional production crews, cover travel costs, pay for motion graphics, sound design, and color grading. Additionally we will need to cover insurance, legal fees, and festival costs.

I am overwhelmed by the friends and strangers who have reached out to help get us to this point. But we still have a long way to go.

During our Kickstarter campaign we will be giving backers a chance to win some amazing prizes like HighBrew Coffee and EPIC Bars. And we are even giving away a Year Supply of Tastykakes! Who said too much of a good thing is a bad thing?
So be sure to follow us on Facebook, Instagram and Twitter so you don’t miss out on chances to win. And click here to join our email list and get updates on the film and Kickstarter.

Thank you for your excitement and support of the film so far. I know we are going to kick this Kickstarter out of the park and make a truly awesome film.

Back our Kickstarter project today. 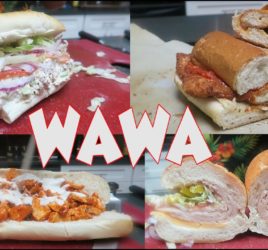 How To Make Every Wawa Hoagie

Are you Team Sheetz or Team Wawa? Don’t let your team down. VOTE NOW.